Best places to visit in Gujarat

1.Rann of kutch
This is the most mesmerizing place I have ever seen anywhere else nestled between endless Thar desert and mighty Arabian Sea having a unique combination of sand and salt. It is said that on full moon nights, this shines like a diamond with a serene calmness all around.we have rented the cottage nearby Runn during the winter cultural festival of Runn of Kutch equipped with all basic eminities showcasing the village culture in a miniature form.Best time to visit Gujarat is during winters, when the cultural fest called 'Rann Mahotsav' is flaunting with live music, dance,Camel ride, Kutch's art and craft and much more.So this one is the must to visit place. 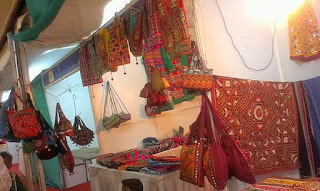 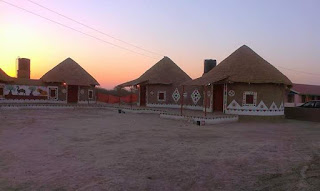 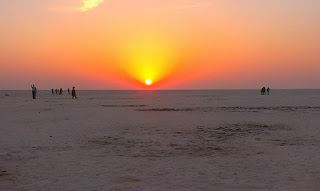 2.Dwarka
Amongest the Chaar Dhaam, Dwarka is the main Hindu pilgrimage destinations in India which is famous for Lord Krishna's sacred city that fills the surroundings with a bliss all around. Bet Dwarka is the place taken by boats across the waves in the middle and renowned Dwarkadhish Temple 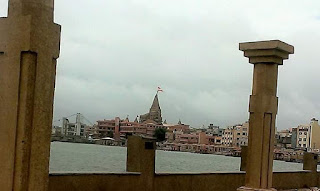 is the five story building and a famous Hindu's tourist place.

3.Diu
Diu , a small island having beaches, cool breezy air all the year around and has the popular tourists attractions like Nagoa Beach, Diu Fort reflecting the Portuguese culture. The beaches are superclean and offers nostalgic views.


4.Gir National Park
The only Natural habitat of Asiatic lions is Gir National Park Where you can watch other wild animals like Hyenas, black bucks, fish owls and all that too in a complete harmony with each other. Watching face to face is truly a lifetime experience although that depends on your good luck times too.

5.Somnath Temple
One of the most sacred places dedicated to Lord Shiva and considered as one of the twelve Jyotirlings, with a beautiful sideview of sea and infrastructure is having intricate designing.

6.Rani Ki Vav
This place is still in our bucket list to visit. The main highlight of the stepwell is that its walls that are ornamented with motifs and showcases images of various god and goddess.

7.Marine National Park, Jamnagar
In this long coastline, there is a tiny reserve known as Marine National Park, which is one of its kinds in India, on the Gulf of Kutch. It’s the only place in India where we can easily find the coral reefs of different shapes and sizes without diving in the water.

9.Saputara Hill Station in Gujarat
If you think Gujarat is just about forts, palaces, temples but surprisingly it is also having a hill station within its vicinity, Saputara. Tucked in the Sahyadri hills amidst the dense forest, Saputara is an uber cool retreat that offers people of Gujarat respite from its humid weather.

10. Sabarmati Ashram in Ahemdabad
Sabarmati Ashram is located in the largest city of Gujarat, Ahmedabad that adjoins the Ashram Road, on the banks of the River Sabarmati. Ahemdabad has famous Akshar Dham temple complex.
And last but not the least ,The statue of Unity, we already discussed in our last post is making Gujarat outshine.

Cultural festivals and street foods of Gujarat
If you visit to plan in winters, then International Kite festival is the must to watch when the sky is overloaded with the brilliant picturesque view of varieties of kites all around.  On Makar Sakaranti, there is a unique kite festival having celebrated all across Gujarat with a huge favor.
The major Gujarati meals you can't miss anyway if you are in Gujarat are Khakhra, Thepla, fafda, Gathiya with fried green chillies are their famous street foods.

Definitely, never to miss if you are in Gujarat during Navratri, Garbha and Dandiya are the famous traditional dances of Gujarat full of enthusiasm and blissful vibes all around.

The famous cities of Gujarat includes Ahemdabad, Surat, Vadodara, Rajkot. As we spent a long tenure in Rajkot,  we really miss the 9th most cleanest city of India and also the 29th fastest growing cities all over the world.

Few years before, when we were staying in Gujarat I found the the state surprisingly quite different from the rest of India, here when I started to find out for the reasons

1.Most prosperous state with GDP almost thrice than India's average, that's not only  the most interesting part of Gujarat but also make us feel proud.

2.Gujarat also known as the 'jewels of the west' has the highest number of vegetarian people as compared to any other state in India.

3.Gujarat is the safest state and having the least crime against the women among all other states of India and you can feel the difference, specially if you belong to Northern India.

4.World's largest grass roots refinery also belongs to Gujarat and is present in Jamnagar which is operated by Reliance India Limited that is founded by Dhirubhai Ambani. Also visit travel-44.com  for more interesting information

5.Surat in Gujarat is the richest city of India even ahead of Bangalore and is also known as the diamond city of the world and is a hub for cutting and polishing diamond.

6.Let's come to most interesting part of Gujarat that every five Indian American is Gujarati and Gujaratis own thousands of hotels and motels in US.

7.Gujarat has cent percent electrical connectivity throughout the state covering all villages and cities.

8. Gujarat has the longest sea shore area as compared to any other states in India, amazing! That's why you go anywhere in Gujarat you will find a beach nearby.

9.Gujarat is the only present natural habitat of Asiatic lions and also Asia's biggest milk dairy is also in Gujarat.

10.Here, the most adorable thing about Gujarat are the roads, not only the national highways but 100% connectivity of villages with well built roads. 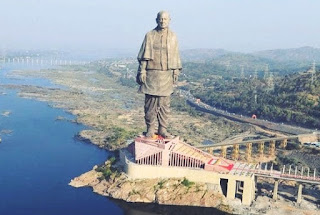 Now,  we know why we need to visit Gujarat atleast once and in the next post we will be outlining the best places to visit in Gujarat, their culture, traditions and values.

Though it is difficult to capture the natural beauty of our beautiful North Eastern India, but as a human behavior we try to grasp everything that draws our attention.

Darjeeling is world famous for their exotic Indian Tea Estates and this is the first thing that attracts you after coming to Darjeeling.Here is the video made on the best views of Darjeeling Tea Estates

Tsungu lake After then we proceeded towards Gangtok and the first site to be viewed was Tsungo Lake which is 40 km away from Gangtok
Let's have a lifetime view of tsungo glacier lake from the top of the valley elevated by ropeways.

Buddha Park in Ravangla is having a high statue of Buddha as a centralized piece in the park,  all surrounded by the lush green natural beauty, mesmerizing the Buddhist Culture. https://amzn.to/35503l0

Here is the exact replica of all the four Dhaams and twelve Jyotirlings of our Hinduism in one complex great center of attraction for tourists and pilgrims.


Also Visit travel-44.com for more interesting stories and information related to Darjeeling and Gangtok
Posted by Mona. Gupta at 6:40 AM No comments:


India celebrates the unity in diversity with so many cultural festivals celebrating all the year around.

Janamashtami is among the major festivals that is commonly observed by keeping the fasting and worshipping, believing that Lord Krishna to have been born on this day, according to our Hindu's tradition. Dahi Handi is the most commonly ritual observed. Mathura, Vrindavan, and Gokul are most crowded with their flying colors.

Here, is the beautiful Lord Krishna at the home. 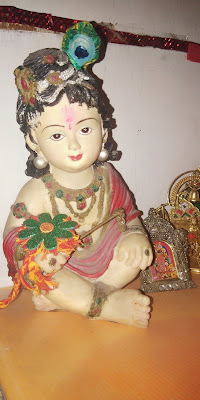 Next, being Ganesh Chaturthi, is the celebration time for Lord Ganesha! During Ganeshotsav, chanting of vedic hymns, prayers are done and on the last eleventh day immersion of the idol is done.

These are the pics of this year's Ganesh Visarjan, we have done in our Society. To avoid the immersion in the water bodies, people are now becoming more aware of the environment and we started the  Visarjan in our Society itself. 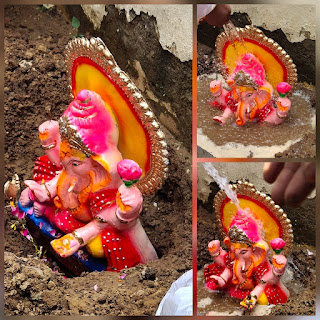 The last week of September commences with Durga puja or Navratri and one of my favorite festivities that goes with fasting and Devi puja for nine days. Kanya Puja is done on the last day of Navratri though we should do it all the year around.

In Gujarat, Garbha is the major attractions  and here, we really enjoyed Garba during our stay in Gujarat. Visit my another blog of  travel-44.com for more pictures.

Where as in eastern India, huge number of puja pandals are set up with amazing decorations.Kolkata being in its most exciting state revealing it's most expensive pandals. Here, I posted few pics revealing the
Beautiful pandals in Jamshedpur during our last year's visit. This year,we are excited to see something new.
On the last day of Puja, Idol is immersed. 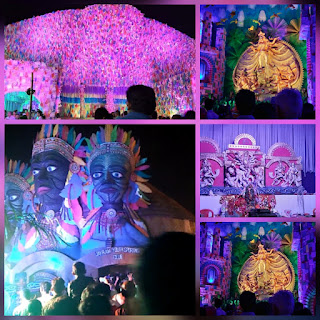 Moharram , Onam and many more are  also there in the festivities.

Now,  the October is on the way with its vibrant colors.
Posted by Mona. Gupta at 8:17 AM No comments:

Banaras,the most Ancient city ,it's rich culture, also being born  there, I am a little more inclined towards the place. 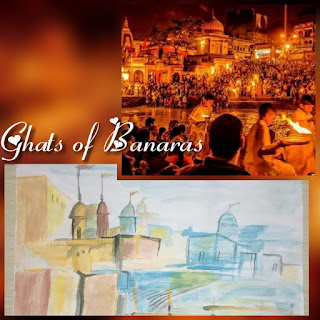 .Ghats have the unique  combination of the life and death playing together, realizing us about the biggest truth of life.

Few Ghats are having Aarti, puja and the celebration of life going on. While another Ghat is having the cremation going day and night.
We have lots of mythological stories relating them all.

And, of course, our Maa Ganga,  is connecting one and all. All the day and night, People take the dip in the holy river.
Morning and Evening Aartis are major attractions to watch and definitely takes us to some another world.

The place is also famous for Banarasi Silk, Banaras ka paan, Banaras ka Madari, Banarasi Sadhu ,hundreds of temples and also the streets of Banaras and the food and.. The list goes on with travel-44.com

It is said, Once you have been there, the  place makes us to think being watching the life more closely.
Posted by Mona. Gupta at 7:31 PM No comments: 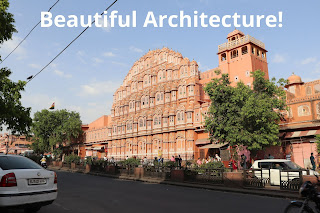 Rajasthan as the name suggests, Raja ka Sthaan or King's place is the most colorful state I have ever seen. So, here, we are just not talking about deserts and little water but it's rich culture, forts and palaces,Camel ride, daal baati churma, ghoomar dance, bandhini fabric and much more.

The first place, I visited after coming to Rajasthan is pink city, Jaipur. What a city it is, the forts and palaces will make you feel never less than a king or a queen.Here, is the picture of Amber fort that has massive architecture. This is one of the best tourist attraction in Jaipur. 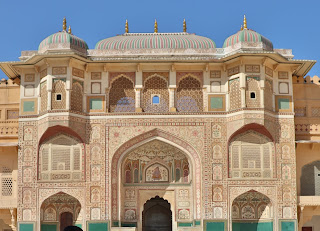 Amber palace has Sheesh Mahal inside. Intricate designing is the treat to the eyes to watch. 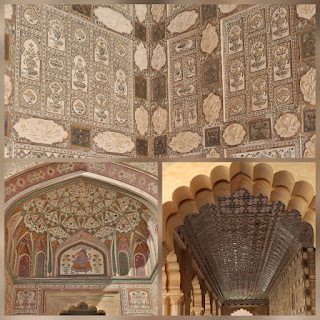 Earlier I saw the pictures on Google but after watching them in front of my eyes is unbelievable. India has finest of art and culture in the world.

The place is famous for the puppets, decorating attires, Jaipur handlooms and much more,all were in my bucket list.

Practically, if anyone is saying that I don't like travelling , then this means someone does not want to come out from their most protective shells. The fact is that travelling really brings you out from your comfort zones.

This counts in terms of physical, mental, financial and Social too!

But actually in life ,we grow through our discomforts as we are told. 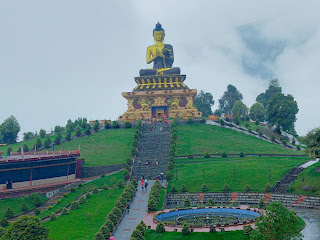 Serenity in the greens leaving  the everlasting memories.
Posted by Mona. Gupta at 9:17 PM No comments: